HOW THE IMAGES ARE FORMED

“This system of endless changes is one of the most extraordinary properties of the kaleidoscope. With a number of loose objects, it is impossibile to reproduce any figure, we have admired. When it is once lost, centuries may elapse, before the same combination returns.”

Sir David Brewster (A Treatise on the Kaleidoscope, 1819)

The optical effect of a kaleidoscope operates on the principle of multiple reflection. The geometric patterns shown are derived from the multiplication of the image of an object set between two (or more) mirrors joined at an angle. The configuration of these patterns is controlled by the mirror system. Usually the mirros are enclosed in a tube containing in one end a cell with coloured glass pieces. But also a marble made of Murano glass, coloured glass wheels and many other objects can create astonishing patterns (as described on the page The Kaleidoscope/ Types of Kaleidoscopes).

A three mirror system creates a geometrical image, that appears to be reflected infinitely on all sides. Typically the three mirrors are set at 60° to each other so that they form an equilateral triangle, but other angles and configurations are possible. Unless otherwise indicated, the kaleidoscopes shown on this website have a three mirror system. 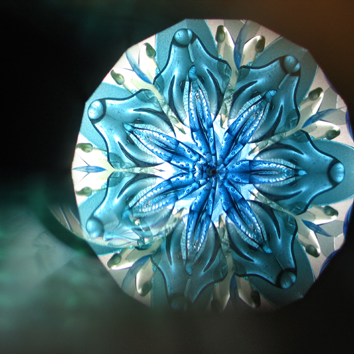 A two mirror system creates a circular image, often it’s colours and transparencies are similar to those of a rose window.  The number of the circle segments depends on the angle between the mirros. The tighter the angle the higher the number of reflections.

Aleph® Kaleidoscopes contain highly reflective mirrors and optical lenses. Because we think, that kaleidoscopic images should be not only beautiful, but also well-focused and bright.

Note: Some of the kaleidoscopic images that you will find on the website are to illustrate what can be seen inside our kaleidoscopes but are very different from the magic of the elusive images and chaotic illusions of an actual kaleidoscopic view. Fortunately, these emotions belong to each of us and cannot be represented here!